Selena is also known as Abyssal Witch is a new hero on Mobile Legends Moba Game. Selena's Role in the game is Mage and Assassin with specialty Reap and Brust. We are going to give full information about mobile legends hero Selena. Here is Selena Best Builds, Stats, Skills, and Story Mobile Legends Guide. 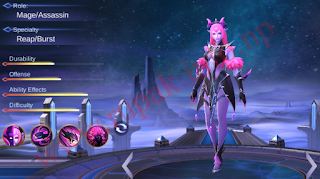 The background story of Selena:
South of the Moniyan Empire lies a bottomless abyss, engraved into this barren landscape as if an ancient demon used the sharpest of blades to carve a disfiguring scar into the Land of Dawn. People call this the Shadow Abyss.
Sealed away at the bottom of this legendary abyss, lies the most terrible demon in the Land of Dawn - the Abyss Dominator. But as the seal slowly fades, the will of the abyss gradually grows stronger.
The demons at the bottom of the abyss tirelessly devise plots to strengthen the power of darkness, persuading misguided believers to provide them with sacrifices for their evil cause. They use these sacrifices to feed the 'Abyss Devil', a monster formed of the purest dark energy that waits in the darkness to devour its prey.
Selena, a young Dark Elf, was sacrificed to the Shadow Abyss by fanatics in exchange for dark energy, and as Elves are the Abyss Devil's favorite sacrifices, Selena was offered up immediately by the demons. The Abyss Devil maniacally drilled into Selena, severe pain and desperation spreading through every corner of the young Elf girl's body. Just as she was about to be consumed by dark magic, a miracle occurred - a warm blue light enveloped the girl, and the dark abyssal magic and this mystical power began waging a savage battle inside her fragile, young body.
Selena awoke to find herself lying in the depth of the abyss, her skin now a mysterious blue tone and her lavender eyes filled with a scarlet glow, with the Abyss Devil lying quietly at her side.
The Demons of the abyss were busy wondering what had just happened. Little did they know, the will of the Abyss had arrived. This girl is loved deeply, and this love has protected her from being consumed by darkness. The Abyss and the moon god - these two opposing forces have reached a balance within her body. An ancient, heavy voice echoed through the minds of the demons, Leave this girl to me. She will become the strongest warrior of the shadow Abyss! The demons obeyed the abyss' command and left her there. When Selena reappeared before the demonic inhabitants of the abyss, with the Abyss Devil at her side, she had completely forgotten her past.
She found that she could skillfully manipulate the abyss to release dark magic, a demoness capable of tearing her enemies to shreds. The will of the Shadow Abyss appointed her as its voice, making it her duty to rule over the demonic denizens. Even the proud Queen of Blood Magic began to feel unnerved upon seeing this young Dark Elf Girl, not only because the abyss had chosen her, but also because Alice could sense the terrible power lying within this seemingly cute and mischievous youngster.

Symbiosis (Passive Skill) For Both Mode -
Because of the power bestowed upon her by the Moon God and the Abyss, Selena can switch freely between her two forms. Skills used in her Elven form will attach Abyssal Marks to her enemies, and skill used in Abyssal form will consume these marks to deal 390-600(+11) bonus magical damage.

Abyssal Trap (Skill 1) -
Cooldown: 9.9 Mana Cost: 60
Summons Abyssal Devils to lurk in designated locations. When approached by enemy units, they will smother them with their bodies, dealing 350(+27) magic damage to the target and surrounding enemies after a brief period of time, while reducing their movement speed by 40% for 2s. Devils can also be attached to Selena's body, but she will not take damage or be slowed by them. Up to 3 devils can exist at the same time. Damage will decay when a target takes damage from multiple devils at the same time.

Abyssal Arrow( Skill 2) -
Cooldown: 11.8 - Mana Cost: 70
Channels the power of the abyss into magic arrows then fires them in the specified direction. Enemies hit is stunned for at least 0.5s and take 250(+4) magical damage. Stun duration and damage increase the further the arrows fly. Abysall Traps hit along the way will be absorbed and the trap's effect will be applied to the target when hit.

Soul Eater (Skill 1) -
Cooldown 5.4 Mana Cost: 65
Uses the power of the abyss to strengthen both claws, causing the next basic attack to deal an additional 320(+29) magical damage while granting a shield that absorbs 320(+16) damage.

Garotte (Skill 2) -
Cooldown 11.8 - Mana Cost: 70
Charges in the specified direction, dealing 150(+11) magical damage to enemies along the way. If this damage triggers the Abyssal Mark effect, its cooldown will reset immediately.

Blessing of the Moon God (Skill 3) -
Cooldown: 3.9
Calls upon the power of the moon God to rid her body of the Abyss, increasing movement speed by 30% for a short time and restoring Elven skills.

These are Selena Best Builds, Stats, Skills, and Story Mobile Legends Guide that we provide you. If any other best build you know let us know on the comment below.