Belerick is also known as Nature's Child is a new hero on Mobile Legends Moba Game. Belerick is Tank hero. On date, 2018/07/05 game system send mail to players that announced Belerick is available soon on the advance server and its free to test for players. Here is Belerick Best Builds, Stats, Skills, and Story Mobile Legends Guide. 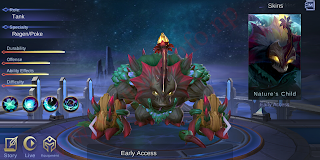 The story of Belerick:
Legends say, the Ancient Ones of the Land of Dawn trusted mystical creatures with grand tasks.

Balerick a member of the tree people, was one of this creatures. Balerick's heart is filled with nothing but kindness - He absolutely hates conflict. Within his ancient self, Balerick possesses a strong life force that provides strong resistance against attacks, but also allows him to reincarnate. Due to his kind nature, wherever there is conflict, Balerick will be there to help the righteous and weak.

One day, Balerick believed he heard the words of the ancient ones guiding him towards the desert. However, he was met with disaster. The great Minoan empire was left in ruins and Minotaur people were filled with despair. In order to save what was left of the Minoans, Balerick unleashed all of his life force to create a beautiful oasis. The Minoan people were filled with hope once more. Seeing this, Balerick's heart was at peace and fell into a deep slumber. Although Balerick cannot pursue the task the Ancient Ones bestowed upon him, he felt no regret-There's nothing more important than life after all.

The Flower Of Life (Passive Skill) :

Belerick receives 30% more HP from equipment items. The Flower of Life deals 50 + 1.5% pf Belerick's max HP points in Magic Damage to the nearest target, every time Belericks receives 200 damage. The Flower of Life prioritizes targets that have been implanted marked by Nature's Seed.

CD: 40.0 Mana Cost: 150
Belericks recovers 10% of his HP and creates a Guardian Area. Belerick takes 40% damage dealt to allied heroes that are within this area. He also receives 30% less damage himself when he is in this area. 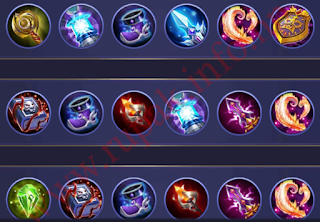 These are Belerick Best Builds, Stats, Skills, and Story Mobile Legends Guide that we provide you. If any other best build you know let us know on the comment below.

Admin
Jul 7, 2018
Game Guide | Game Information | Gaming | Mobile Legends
Facebook Twitter
WriteHideComment
Remember,
Comments deemed to be spam or questionable spam, including profanity and containing language or concepts that could be deemed offensive will be deleted. Only comments that are relavent to the post topic will be published.